“It is a capital mistake to theorize before one has data. Insensibly one begins to twist facts to suit theories, instead of theories to suit facts.”
― Sir Arthur Conan Doyle, Sherlock Holmes

After chapter 1 you should have a user account on Open Lynx and you should also know what a device, function and installation is.

Data, or metrics, is the most important part of an IoT system. After all, that is why we are here in the first place. Please note that IoT is not only about collecting data from sensors, it is also about controlling actuators in the system.

Let's start with the data from a thermometer. It is very simple. It looks like this:

It's self-explanatory, the value reported at that time was 23.4.

But wait! How do I know what that is, it can be just anything? That is true, it could be just anything. But there is a little more to it. Let's start with the topic. Each data packet (sometimes we call it a metric) that flows through the system has a topic. In the case above, the topic might look like:

As you can see, they differ quite a lot. Maybe you can guess that these are two totally different types of thermometers. The first one is a LoRa sensor, and the second one is a Z-Wave sensor. So from this we learn:

Data is very simple, in its simplest form just a value and a timestamp. The topic might be just about anything.

Cool, isn't it? Well in order for this to make sense, we need to take a deeper look into functions.

You already know from chapter one that a function represents something that you can measure or control and as seen above data seems to be connected to topics. The topic is the key to finding data, but in order to know what data we get we need functions (and devices). So the data is accessed by topics and DevX/FuncX is a catalog over these topics.

So let's have a closer look at a function.

This is a function in its simplest form. There are only a few parameters that are mandatory, installation_id, type, and meta. The id is also mandatory but that one is handled by the platform. We already know about installation and why it is mandatory right? If you don't remember, this see chapter 1 about installations. So now lets look at meta and types.

In IoT Open we like freedom. So the metadata might be just anything. But to make it easier to build applications, we have set up some rules.

These metadata fields are mandatory

name: The name of the function.
icon: The icon to use when presenting this function.
format: Format string as a printf format string. Please observe that the value is always a float (%f).
visible: Whether this function should be visible in user interfaces where the flag is honored.

This is also what you can expect go get when building an application towards IoT Open. But hey, still nothing about the data? Not yet, but here it comes:

It is recommended but not mandatory to always have a topic_read set if it makes sense.

This section should just be looked at quickly. There is no need to fill you brain with this right now. Only note that there exists predefined function types. When you need it, come back here or look at the documentation:

Since some functions are more complex than others, we have defined some that covers most cases. It is wise to use these when possible to make it easier to write applications using them.

Before looking at them let's explain why we need them. We start with the switch, and the rest will be easy to understand since they are following the same pattern solving the same problems.

There are many types of switches. What they have in common is that they switch states. But how they do it depends on the manufacturer, the type of actuator and so on. Some systems try to normalize the function so all switches (and other devices as well) looks the same. But if that is done, there will always be a limit in number of devices supported by the system. IoT Open supports any device, remember FunctionX. IoT Open is true to the data, and the data that comes in is what gets out.

Like stated above there is no need to memorize this, the table will be here in the future as well. If you get the concept, it's fine.

In the previous section we introduced function types. The type of the function is mandatory. But it is actually not used in the platform for anything, except telling the application what type of function it is and how to present it. You can use your own function types, and they will fall under all in the table above. Like written before, it is good to have a topic_read where it makes sense.

So now we have learned enough to test some of our new skills out.

On this site there is a workbench suitable to test IoT Open out. Some things you can do in the workbench you can also do in the standard user interface. The workbench itself in an example of an IoT application built on IoT Open using only the available API.

In this exercise we will use both the workbench and the standard user interface to illustrate data through the system.

So let me introduce, the Workbench!

As you will see, there are many ways to interact with IoT Open. We will see more during this course. You have already seen the interface bundled with IoT Open, and now we will use the workbench. The workbench is a tool for elaborating and testing IoT Open. Be careful since it is very powerful and there is no undo...

We will start with the Function tool. With this tool you can create and modify functions. In the editor you will see the function in json data just as you will from the API. Let's create our first function!

Ok, lets take a break here and see what we have. You should see something like this. 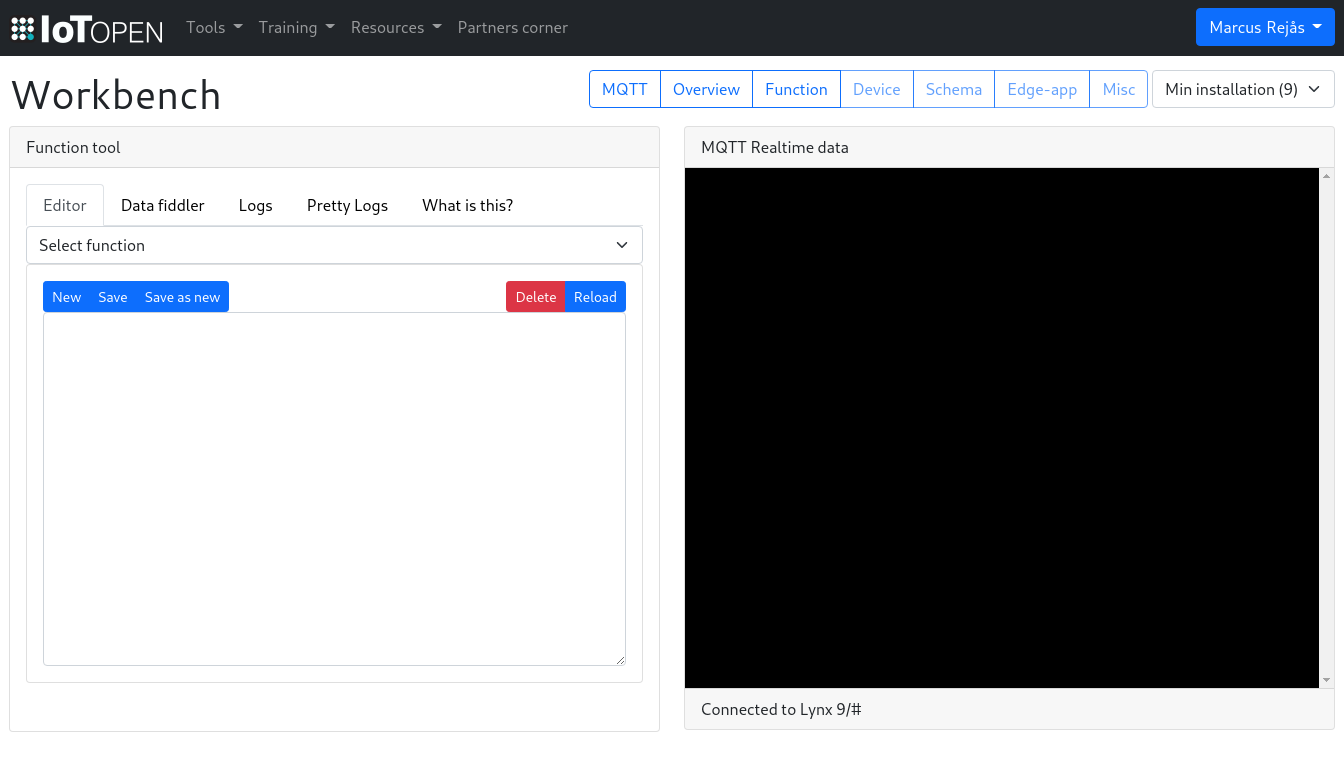 There are two sections of the tool. The one to the right is the MQTT debug window where you will see all data from your installation in real time, and to the left you see the tool you currently are using. In this case the function tool. In some cases the tools needs more space, and the MQTT window might be less interesting. Then you can click on the MQTT option in the menu to toggle the visibility of the MQTT-window. At this point there won't be much happening in the MQTT window because there is no data flowing for your installation yet. But leave it open, there will be data really soon.

Got it? Ok, lets move on and create out first function.

The editor populates with an example function like the one below. For now, it is ok.

When saved you will see that it got some new data from the platform, like id and some timestamps. Please note that there was also a message published on MQTT. This is a signal that the functions in some way was changed in the installation. As an integrator this might be useful to be alerted about when it is time to update your functions. But we will cover that later.

We will cover meta more in depth later on. But now, lets produce some data from our function.

As you may see in the standard user interface there are no data from our function. This of course makes sense, but it would be nice to have some. This is where the data fiddler comes in.

There are three sections in the fiddler. The first is a summary of the function. The second is the last known value from the function. Please note that this value is fetched from the data storage and is not in real time as the one on MQTT. There may be a delay for some seconds before the latest value is in the log, and you'll have to press the refresh icon to update this window. The third is the Data fiddler that you can use to publish a value on MQTT to one of the topics of the function.

You will see the value on MQTT in the debug window.

Did you see it? Great!

In chapter 2 we have talked a little more in depth about functions and also started on metadata. We introduced topics and, we tried the workbench.

Now you should have a function in your installation, and you should have sent a value on its topic_read. You should be able to see the value both in the standard user interface and in the data fiddler on the workbench.

You are now well-prepared for the next chapter!